An Australian First For Brewing Systems

Matilda Bay is the first brewery in Australia to integrate its automated beer fermentation and gas monitoring systems to achieve greater brewing efficiencies.

This is another first for Matilda Bay which was Australia’s first new brewery since World War II and the first craft brewery in the country.

Fast forward nearly forty years and Phil and the team have reunited. The team has created a Matilda Bay Brewery and Bar in Phil’s hometown of Healesville in Victoria, five years after Matilda Bay in WA closed down.

Building the brewery on an old winery site using a premium stainless brew kit supplied by BeSpoke Brewing Solutions, Phil and the team initially called on the expertise of Fermecraft to control the brewery’s tank farm. However, as the project got underway, Fermecraft’s involvement in the operation expanded considerably.

“This became a really exciting project, as it was the first time we’d worked together with gas detection specialist KD Fisher to provide a completely integrated solution for CO2 monitoring,” said Warren Bradford, electrical engineer and Fermecraft’s founder.

Warren explained the ability to integrate the carbon dioxide (CO2) system from KD Fisher with Fermecraft’s own automated fermentation system could mark a substantial change in brewing operations.

“It’s game-changing for brewers because it means they no longer need to buy a controller for CO2 monitoring, they just need a sensor. This saves significant costs and improves overall efficiencies,” said Warren.

This is significant as most CO2 monitoring systems require extensive wiring to be installed leading to much higher risk to become faulty, overheated or entangled.

“A normal CO2 system has wires running everything and the infrastructure is limited. Fermecraft’s connection to wireless CO2 sensors requires no change at all to existing factory wiring. We write software to allow CO2 technicians to check the sensors and use the technology in the way they want,” said Warren.

The system will also provide data analytics for monitoring, giving users the ability to control and understand the status of their brewing operation.

“KD Fisher engineers have their own access pagers within the Fermecraft interface touch screen, so their servicing and calibration procedures can be carried through our control panel.

“It’s all about making processes as easy as possible for technicians and the brew staff at Matilda Bay,” explained Warren.

Customising Fermecraft components to connect effectively with KD Fisher’s CO2 sensors, and meet the needs of Matilda Bay and its brewing processes is testament to the skill and knowledge of the Fermecraft team to adapt to customer requirements.

To find out how Fermecraft could help you, please click here. 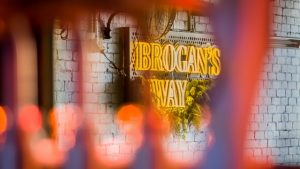